Cars are no longer just about getting from point A to B. Technological evolution is making them smarter
than ever before 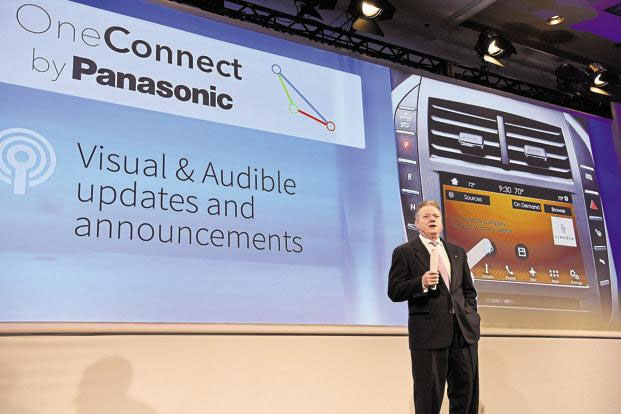 Joseph Taylor, chairman and chief executive of Panasonic, during CES 2016 in Las Vegas in January. The annual event saw the coming together of tech firms and car manufacturers for the next era of automobile revolution. Photo: Bloomberg

Cars mean different things to different people, and are perhaps the best examples of personalization. Over the years, that has led to many changes in the automotive history. There was the tailfins and chrome era in the late 1950s and the muscle car era in the 1960s and 70s to name a few. Most changes revolved around making the cars better to drive and prettier to behold—the radio became a part of the automobile legacy in the 1930s, while the power steering was first introduced in the 1950s. We take all this stuff for granted in modern cars, but someone had to start somewhere.

What we have seen in the last 12 months is historic in itself. Silicon Valley is invading the Detroit turf, but they come in peace. Think of your smartphone, your iPad, laptop or even the smart TV—tech companies are cherry-picking the smartest technologies, developing some more and blending that together into a cocktail that may make a car journey safer, more comfortable and constantly connected.

Soon, you will have more intelligent sensors in the car you drive to work than the number of nuts and bolts used to put it together. Today, almost every automaker has a hybrid car in its line-up, there is a shift towards smaller and more fuel-efficient engines that don’t compromise on power and performance, and self-drive cars are pretty much around the bend. “Growth of hybrid technology and their preference by the government under the Faster Adoption and Manufacturing of Hybrid and Electric vehicles (FAME) scheme has made manufacturers sharpen their focus on hybrid vehicles,” said C.V. Raman, executive director, engineering, Maruti Suzuki India Ltd.

If what we saw in 2015 is an indicator of what is to come, consider that as a rather tasty starter for the main dish, which should unveil itself over the next 12-24 months. “Customers are looking for value for their money with best technologies in their vehicles. Since the consumer trend has been changing, the Indian car industry needs more technology-driven service solutions to enhance the car experience,” said Katsushi Inoue, president and CEO, Honda Cars India Ltd.

What do you hate the most about your shiny new car? Unless you are buying a Range Rover with a Harman Kardon or Meridian audio system, chances are, you’ll say it is the rudimentary and truly boring in-car entertainment system that was standard fare till now. But times are changing, and your smartphone is central to that.

Tech giants Apple and Google have launched their respective platforms designed for in-car entertainment systems. Not only do they offer a much bigger range of features, but seamless integration of hands-free calling features, music streaming, maps and more. It becomes easy for the person driving to make or receive calls or change a track that he don’t like, without taking his eyes off the road.

“The standout development for me is the adoption of Apple CarPlay and Android Auto by OEMs. This has happened at a rather fast pace and given all the signs their adoption is going to have a huge impact on the road map of infotainment systems,” said Ashish Khushu, vice president and head, Transportation Business
Unit, Tata Elxsi.

Towards the end of 2015, Maruti Suzuki launched the Baleno hatchback in India—the first car on our shores to offer Apple CarPlay as a standard spec on certain variants. “The Apple CarPlay system was launched for seamless connectivity and entertainment while the eyes and attention stay on the road,” said Maruti Suzuki’s Raman.

Globally, almost all major car makers have tied up with either or both Google and Apple—Audi, Fiat, Honda, Hyundai, Mercedes Benz and Volkswagen to name a few. But, Maruti essentially took a gamble with the Baleno. “The major risk associated was the acceptability of the feature by Indian car consumers. The feature requires Internet access and can be best experienced with good Internet speed which is a major challenge in the Indian context,” added Raman.

Although, if you don’t have the budget to buy a new car anytime soon, there is good news for you. Pioneer Electronics is already selling a range of Apple CarPlay certified in-car entertainment after-market options (Rs 36,990 onwards) that can be installed in your existing car.

American car maker Ford has developed smart in-car systems, along with BlackBerry and Microsoft. The Indian market got the first taste of the Sync feature, in the EcoSport crossover launched in 2013—voice commands to control phone and music, Bluetooth and Emergency Assistance which in case of an accident (when the airbags are activated and the fuel pump is shut off) makes a distress call to the helpline number. Ford will be updating to Sync 3 this year, by enhancing the AppLink feature for better app integration, and also support for Apple and Google’s platforms.

Microsoft’s Windows 7 Embedded Automotive platform has been the foundation of various smart car set-ups; Fiat’s Blue & Me being another example. “In the near future, the car will be connected to the Internet, your mobile phone and your home computer,” said Peggy Johnson, executive vice president, business development, Microsoft, talking about the company’s automotive partnerships.

Microsoft has no intention of building its own car, unlike Google. At the Consumer Electronics Show (CES) 2016 in Las Vegas in January, Microsoft announced a tie-up with Harman International Industries for Harman’s Connected Car products. Microsoft will integrate its Office 365 cloud-based productivity. Accessible through a voice-based personal assistant Cortana, drivers will be able to schedule meetings, hear and respond to e-mails and join Skype conferences.

Best known for cars that James Bond drives, Aston Martin, and Chinese technology company LeTV have worked on a car we now know as the AutoLink Rapide S. Basically, it has what is known as the human-machine interaction (HMI) speech recognition technology to control the Internet of the Vehicle (IOV), which links to LeTV’s Cloud service for remote monitoring and more. “We have successfully equipped this supercar brand with over 100 years of history with an Internet brain,” said LeTV co-founder and Super Car CEO Ding Lei, at the time of the unveiling. There is a 13.3-inch high-definition display with all of the car’s infotainment features and a second 12.2-inch screen sits in place of the car’s instrument panel, and digitally displays speed, fuel level, etc.

Hands off the wheel

The race to make autonomous cars, also known as self-driving cars, is something all carmakers are involved in. They want you to read the newspaper, catch up on your favourite TV show or simply go ahead with the presentation you are working on, during the daily commute to work, and back. By the year 2020, Audi, BMW, Daimler, Ford, General Motors, Google, Kia, Mercedes-Benz, Nissan, Renault, Tesla and Toyota believe they will be selling vehicles that can partly drive themselves. “The automotive industry is at an inflection point, with vehicles moving quickly towards greater autonomy. However, the software required for automated driving applications is highly sophisticated,” said Ian Riches, director, Global Automotive Practice, Strategy Analytics, QNX Software Systems. The company has introduced its ADAS platform, for automated driving system

An autonomous car has multiple cameras, radar, lidar or laser-based sensors and transceivers. But, chances are all these devices may still miss out on some minute but critical information. Microsoft has tied up with Michigan, US-based IAV Automotive Engineering Inc. to develop a sensor that “sees” what cameras and radar might not
pick up.

However, it is not all about only the geeky stuff. Swedish car maker Volvo’s vision of driverless cars includes streaming a movie or TV show during the drive to and from work. “With autonomous drive it is no longer just a question of just getting from A to B quickly – it’s about the experience you wish to have in the car,” said Anders Tylman general manager, Volvo Monitoring and Concept Center, Volvo Car Group. They have tied up with telecom company Ericsson and will leverage its network and cloud technologies.

Gartner forecasts that by 2020, 70% of all auto-related customer interactions will be digital, including real-time service, product and pricing information. Carmakers in India offer smartphone apps that allow users to keep track of the service, set reminders, estimate repair costs and connect with service centers.

Honda Cars India Ltd’s Connect device lets the user access engine and battery health, locate the car, analyse driving quality and even call the helpline in case of an accident. “It is an intelligent and advanced information platform for its customers to provide convenient access to detailed information about their vehicle and paves the way for advanced connectivity,” said Honda’s Inoue.

* All fields are required

We received your message and will be in touch with you as soon as possible.